Virtual Reality and the differences with AR and MR

Immersive technologies have been opening up new horizons for their applications in everyday life, and that is why several manufacturing industries are investing in Virtual and Augmented Reality. These solutions are easy to use and able to improve our perception of the environment surrounding us, increasingly involving our senses: an unstoppable evolution that is changing the way we work, see and play.

Virtual reality represents one of the most notable examples of the advancement of these technologies: indeed, while once associated with videogames only, VR is increasingly finding application in several important sectors.

However, what is Virtual Reality and how does it work? And what are the differences between VR, Augmented Reality and Mixed Reality? Let’s find out in this HeadApp article.

What is Virtual Reality?

Virtual reality (VR) is an immersive technology that creates a fully digital reality where you can move freely using visors and other smart devices. Hardware devices and special hi-tech software mix real footage (recorded with specific cameras capturing 360° images) and three-dimensional remodeling. Therefore, VR recreates a virtual space that envelops and involves us completely, so much so that both our eyesight and our senses are deceived into believing that space to be real.

Thus, VR is a simulation of actual reality that takes us into a 2D and 3D dimension to be discovered. Users’ involvement and their immersion into this digital reality is what makes the difference with augmented reality. By wearing smart visors and cutting-edge special accessories such as wired gloves, shoes, headphones and cyber suits, we can immerse ourselves within, move into and interact with the simulated 3D world. A surrounding environment that is not only visual, since the other senses are also stimulated, but in fact appears to be real.

To immerse yourself in this simulated virtual environment you need to wear VR visors. These are devices with two displays at eye level. It is here that you get a stereoscopic projection of the virtual worlds. Smart helmets allow users to view 2D or 3D computer-generated environments, as well as to isolate themselves from external reality.

These screens remove actual reality from the user’s field of vision substituting it with another, simulated one. A new dimension that we can divide into types based on the different experiences they can offer:

The VR viewer can also have motion-detection systems capable of detecting our body’s movements.
Usually, two controllers enable you to interact with objects. As soon as we put it on, the visor will be able to understand exactly where we place our hands in the digitally recreated space.

Moreover, thanks to specific software, the helmet memorizes our head’s movements. The result? It adapts the view and perspective of our position. Virtual Reality uses motion sensors and 3D sound, which reinforce the feeling of being catapulted into another environment within the actual space. 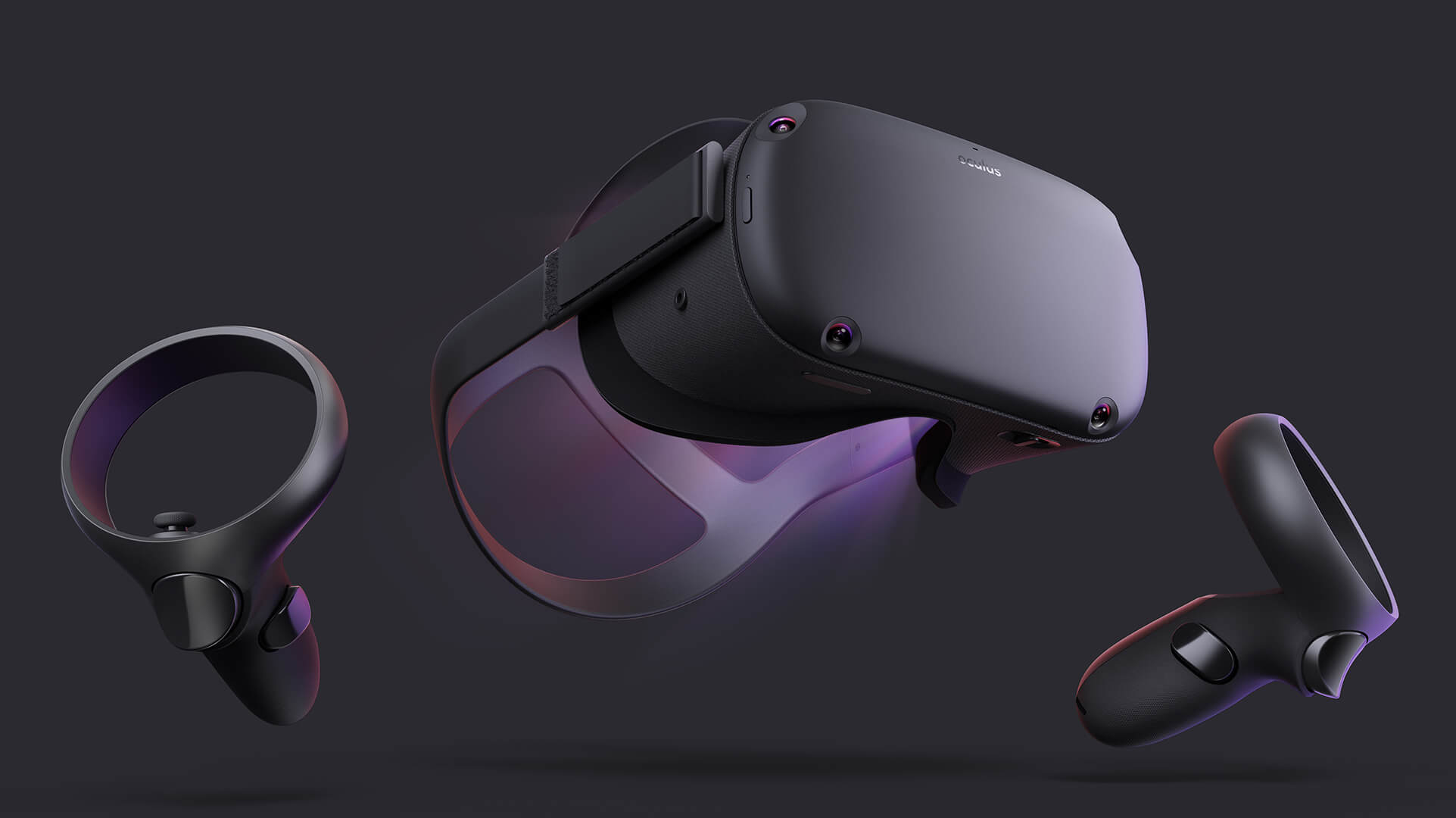 VR visors are paramount to take us to a virtual world. So, what are their features?

Smart helmets must have:

Moreover, to increase the degree of immersive reality we can use earphones, wired gloves (gloves that replace mouse, keyboard, joystick), and the cyber suit.

In Virtual Immersive Reality (VRI), the perception is that of being entirely immersed in a virtual environment. The degree of immersion into 3D reality and sensory absorption is therefore total. This is possible thanks to the use of some peripherals, such as:

The non-immersive or partial Virtual Reality, instead, does not make use of visors: the user sits in front of a monitor that functions as a window on the 3D world. Consequently, interaction occurs through specific joysticks. This causes a less immersive effect than that of VRI.

Augmented reality and the sensory experience of the user 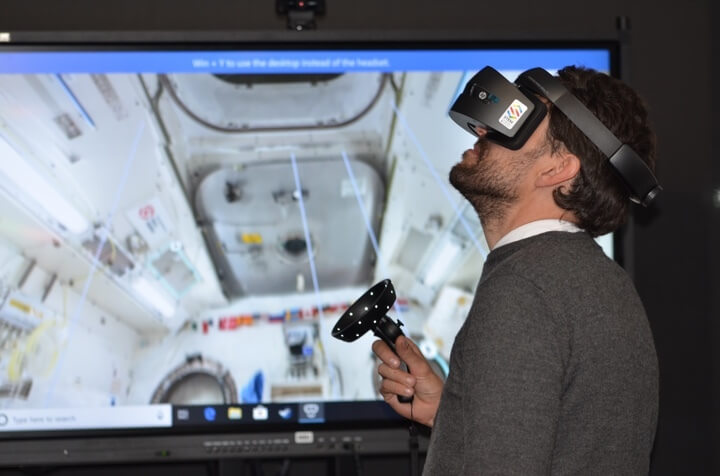 Augmented Reality is another type of immersive technology. Thanks to the use of mobile displays and wearable devices, AR enriches users’ sensory perception. How? Via the superimposition of images, sounds, texts, movies and other information that are usually manipulated and conveyed electronically. In effect, our five senses would not be able to perceive these data otherwise.
Augmented Reality provides a high degree of interaction thanks to the Overlay principle.

Framing any object with a smartphone or tablet (in any case, devices associated to a dedicated management system), the cam “reads” the object. The system, therefore, recognizes and provides new real-time information enabling a higher degree of communication. This allows for the integration between the surrounding environment and the digital world, increasing our sensory experience.
Smart glasses, visors, contact lenses and smart helmets; smartphones, tablets, navigators; magic mirrors are among the devices used in Augmented Reality. Like VR, Augmented Reality found its initial application in gaming but is now used in several sectors.

Virtual and Augmented Reality: what are the differences?

To summarize: Virtual Reality recreates a digital environment from scratch. In this simulated world, we are totally free to move and our immersion experience is complete.
In Augmented Reality, information, images, sounds and videos are added to what is placed in front of our eyes. Users cannot fully immerse in what they see, because Augmented Reality does not provide a real reconstruction of a digital environment. Unlike what happens in Virtual Reality, which simulates actual reality, transporting us into a new dimension that we can explore.

Therefore, we can say that:

It is the different degree of immersion that constitutes the difference between AR and VR. The latter is, in fact, more immersive than Augmented Reality, to the extent that it deceives our brain into perceiving space as if it really existed before our eyes.
Both, however, debuted in gaming and entertainment, but subsequently came to be used in important sectors with considerable advantages for companies that have invested in these immersive technologies. Within this context, HeadApp offers its Eye4Training, the software that uses Virtual Reality to train operators in a safe environment.

What Mixed Reality is and how it works

The connection between VR and AR is Mixed Reality, which, as the name suggests, mixes the two. In fact, with Mixed Reality, Augmented Reality becomes more immersive thanks to the use of VR devices. A particular overlap occurs, as a result of which virtual objects, called holograms, are perceived as real. This creates greater interaction for the user who can freely move within this environment.

MR is the latest among immersive technologies to enter the market, but software and hi-tech manufacturers greatly value its potential.
So, how does Mixed Reality work? The user wears a holographic device consisting of a hi-tech display and new-generation sensors and audio. Depending on its technical characteristics, this wearable device allows for digital content input in the real world.
However, more than anything else, MR is seen as the newest evolution frontier of Virtual Reality, with a greater degree of futuristic innovation.

Fields of application of Virtual Reality

We have seen how Virtual Reality and Augmented Reality were initially used in entertainment, gaming, and then made their way into infotainment and other important sectors.

For example, VR finds application in the manufacturing, tourism and business sectors, in medicine, architecture and sports. This advanced technology enables professionals and technicians to virtually be everywhere, cutting on business costs of transportation. VR constitutes a space that is worth exploring in full (think of its Healthcare applications, as in the Eye4Care solution designed specifically by HeadApp), which can provide useful feedback for tasks and acquisitions throughout the various work phases, with enormous advantage for those users operating in a dangerous or impractical situation.

Indeed, reducing the risk of work accidents is one of the pluses of this technology. For this reason, Virtual Reality is widely used in the training of young surgeons, nurses, airplane pilots with little or no flight experience. A complete training that takes place in a safe environment and is thus able to increase the skills acquired, with considerable savings in training costs for companies.

For more information on HeadApp software, contact us for a free consultation or visit our Solutions page.

Expand Your Business As an Eye4Task Retailer

Find out how AR and VR can impact your organization